Ruth Durkin: I Ain't Afraid of No Ghosts

As Halloween night draws ever nearer, Ruth tells difficult tales of 'ghosting' – the phenomenon where relationships and friendships are ended suddenly, and without warning.

Ghosting (verb): the practice of ending a personal relationship with someone by suddenly and without explanation withdrawing from all communication.

We’ve all lost people in our lives; people move away, lifestyles change, and people inevitably fall out with each other sometimes. But when no line is drawn to end the friendship, and the plug is abruptly pulled out with no warning, it can leave a wealth of questions and a deafening silence.

I have Bipolar II and Borderline Personality Disorder. I am lucky to have many friends who love and understand me, warts and all, but I’ve been ghosted by more people than I care to remember, and on many occasions, it has been because of my ill mental health.

I understand that sometimes there is no reason for this departure, but my mind fills the void where communication once was with endless scenarios and theories which normally involve the absentee hating me and thinking I’m a terrible person.

When I make a new friend, I feel that I am deceiving them if I don’t confess my mental illness to them immediately. I wonder how far into the relationship I should make the announcement, and it hangs around my neck, shadowing all our pleasant first interactions.

When I ‘come out’ to people about my mental illness, on many occasions I have seen their pupils dilate as they see me through new, sceptical eyes. They are at once suspicious, frightened almost. “Does it mean she’s dangerous/will I ever see her ‘other side’/is she just pretending to be normal/will she be a needy and paranoid friend?” Of course, they may not be thinking any of this, but I think their shock in some part is due to a lack of understanding.

For some people, this revelation marks the end of the relationship. They bolt out of the door before our friendship has even started. Since I had my little boy I’ve lost a few ‘Mum friends’ when I’ve been honest with them. Because I’m so open about my condition, will my little boy be ridiculed for having a ‘mad mum’ as he gets older? I hope he will grow up understanding his Mum and defending me against people who can’t comprehend that being mentally ill doesn’t make you an axe murderer.

For others, I have been too intense, too miserable, or simply done a disappearing act. The clue is in the title with Bipolar Disorder; I have two different sides. People from ex-boyfriends to employers have commented that I have two personas; long before I got my diagnosis.

Of course I was intense, I want to say to them. Our relationship took place when I was hypomanic. The sun glowed brighter and shone through a kaleidoscope, basking our Hollywood-esque fairytale in glorious technicolour. I felt everything all at once, I sparked with electricity and my energy and passion was intoxicating. I sent you song lyrics and wrote poems; I felt that everything was connected and that the planets had aligned to cross our paths. I hardly slept or ate and was reckless. I coerced you into stealing vodka with me from behind a bar and made you go to 6am Mass with me at the Cathedral after an all-nighter. Unfortunately, there was a blood-curdling anxiety that accompanied the high, but you just thought I was a bit highly strung.

Or perhaps you saw the antithesis of this. I look miserable at your birthday party, I am rude and standoffish, I have gained several stone in weight and look like a completely different person. Or worse, I disappear completely. I have blacked out on a night out and behaved strangely, told you all my deepest, darkest secrets and scared you. Or, I am in a black hole of depression and don’t get out of my bed for weeks. My hair is matted together, I get a bacterial infection on my skin from not showering or looking after myself. But you won’t see any of this. You’ll just think I’ve ghosted you.

So this is where the ghosting phenomenon comes full circle. Other people have probably ghosted me because they are going through a difficult time in their own lives. How self-indulgent of me to think their lack of contact had anything to do with me whatsoever!

But sometimes it does. What would really help me is if a conversation took place to end the friendship or relationship. I’ve had a couple of friendships end because I was MIA and the person didn’t understand why I was so inaccessible after a period of intense friendship. They couldn’t comprehend my hibernation, but we wished each other the best as the curtains fell. I had closure, an explanation, and a line had been drawn.

I would be less troubled by an actual ghost appearing in my living room than I am by the unexplained disappearance of former friends. This Halloween, don’t be a ghost; man-up and tell that friend who drifted that you didn’t understand their behaviour or what was happening, but that there are no hard feelings. That way everyone can move on. 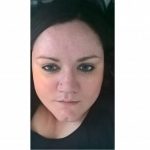 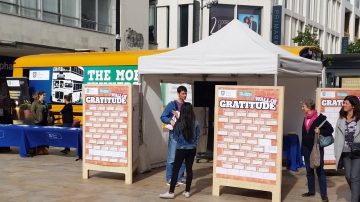 Back in September 2017, the Wall of Gratitude came to Sheffield as part of the University of Sheffield’s “Mobile University”... 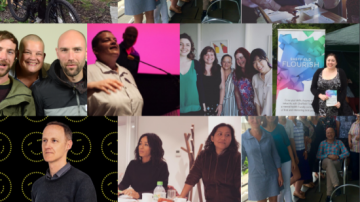 We took our first, slightly wobbly, steps into life in 2016. Much like a newborn, we were dependent on the... 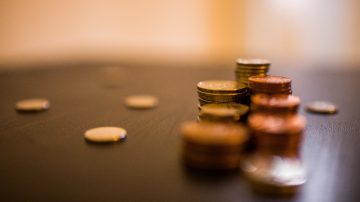 Universal Credit is imminently rolling out; one of a long string of changes to benefits over the last eight years....