The information on this website is likely to have changed due to Coronavirus measures. We have been collecting information here about support that is still on offer, as well as what’s changed. This includes adult mental health services, children and young people’s mental health services and general support. If you would like to speak to someone about available support please get in touch and we will respond as soon as possible, or call: 0114 273 7009

Will Hobson: League Launch and Brunsmeer Awareness FC in Action

Brunsmeer have been around for a while now, training as a team on a weekly basis and even playing other teams in regular 7-a-side fixtures. However, 2018 saw the launch of the Sheffield and Hallamshire Flourish League, and thus the first time Brunsmeer had been involved in regular 11-a-side fixtures in a competitive setting. The league launch kicked off in November 2018 and took place at Brunsmeer’s home ground, with 7 different teams from the Sheffield area coming together to battle it out and determine league rankings for the coming season.

Brunsmeer were involved in two 40 minute 11-a-side games (20 minutes each way), with the first kicking off at 2pm on what was a cold and rainy afternoon. The game got off to a lively start and Brunsmeer kicked into action, attacking down both wings and looking very much the more likely team to be first onto the score sheet. Sure enough, Brunsmeer were awarded a free kick just inside the five-minute mark, after a late challenge just on the edge of the box. It was put away with ease in a classic set piece straight off the training ground; 1-0 Brunsmeer. It then wasn’t long before Brunsmeer struck again, with a splendid run down the line followed by a pinpointed cross directly onto a Brunsmeer head, and the ball was nestled safely in the back of the net; 2-0 Brunsmeer!

The game began to settle down a bit after this and the opposition slowly began to take control, looking increasingly likely to score with a few near-miss chances around the 18-minute mark. Sure enough, on the stroke of half-time, an absolute screamer of a volley took a deflection off the post but that wasn’t enough to save Brunsmeer; going into half time, the opposition had pulled one back; 2-1.

A lively half-time team talk from Sam clearly had an effect on the team, and Brunsmeer launched back into action, scoring again with a cheeky chip just two minutes into the second half; 3-1 Brunsmeer! They didn’t stop there either, riding this newfound confidence and bouncing two close attempts off the woodwork in quick succession. History would soon repeat itself however, as Brunsmeer began to back down and the opposition took control of the game once more, scoring five minutes before full time; 3-2.

“It’s coming boys, keep pressing!” came the cries as the opposition desperately tried to level the score before the whistle was blown. Brunsmeer held their own though, and came out on top with a well-earned victory.

In Brunsmeer’s second game, it was much later in the day and they found themselves pitted against a much more experienced side playing a much higher level of football. Brunsmeer suffered quite a heavy defeat, but still managed to break their opposition’s clean sheet, and it was the never-give-up positive attitude of everyone involved that perhaps made this the most spirited of Brunsmeer’s two performances on the pitch that day. This was perhaps summed up perfectly by Brunsmeer’s keeper Matt, who it later transpired had dislocated his finger during a flying save to keep Brunsmeer in the game early on. Despite this, he remained in goal for the entire game, and even stuck around for a picture afterwards before heading off to hospital.

Want to know more about the league and how to get involved? See here!

How Lisa is coping during Covid-19 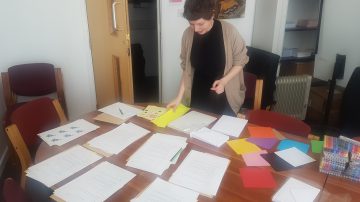 Art packs for the community 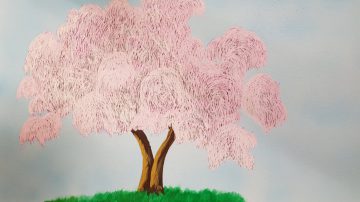