“One good thing about music, when it hits you, you feel no pain.” – Bob Marley

Good old Bob Marley had it right all those years ago, when he commented on how music can hit you good and hard – but you will never feel pain from it. In fact, I found out today, that music can actually have a huge impact on you mentally, physically and emotionally. Today, I visited Open Door Music, an absolute gem of a place within the Stagg Works at Sheffield.

Once again, I have found myself completely inspired by the people I have met today. But, first, let me give you a bit of background. So, Open Door Music is one of Sheffield Flourish’s enterprises, it is run by the lovely Nick who is an unbelievably welcoming and chilled out guy. The concept of the group, is that anyone who is struggling with their mental health or has ever had a mental health condition, can turn up and embrace music. Where I say embrace music, I mean you can really embrace music. You can pick up an instrument, there’s a huge collection of guitars, drum kits, keyboards, tambourines – I’m pretty sure I saw some bongos as well! Or you can just turn up for a chat and listen to the rock music that the group are playing. Let me admit to you now, I didn’t try my hand at any instrument playing, but that’s probably a good thing – I’ve got two guitars in my room collecting dust because whenever I attempt to play them, I get numerous complaints from my family and neighbours.

But that’s the great thing about Open Door Music. Nobody has to worry about angry (and boring) neighbours or condemning their family members to a headache. The music is loud and proud. And very good might I add!

When I first arrived, I immediately felt like I’d entered a rock band’s man cave, there was magazines with REM, Suede, Metallica, Rolling Stones and Jimi Hendrix posing on the front. The building was so raw and oozing with musical potential.

Of course, this musical potential came from the inspiring individuals who I met. Everyone who I spoke to opened up about how supportive the group is. Nobody has to worry about stage fright because everyone is so encouraging. And from the brief time I spent there, I could really tell how much the group banded together (pun intended). As I mentioned the lovely Nick earlier, he appeared to be very popular with the members, as one individual informed me that they come down just to see him especially. They spoke about how they could talk to him about anything and always have a good laugh.

And that’s what this group is. It’s a good laugh. It’s great fun. I mean, how many people can honestly say they don’t want to pick an instrument up and have a go in a non-judgmental environment. Or sing your little heart out as if you were in the shower and nobody could hear you. Or even just dance around as if you were a child again. Well, you can do that at Open Door music.

One individual insisted on telling me that this group is their therapy. Music is their therapy. And you could see that in each individual who attended. Everyone was so fixated on the music, so chilled out with by it, that nobody had time to think about their mental health at the same time. And that’s what we all need isn’t it? A distraction. An outlet. Anything that takes our minds away from the pain that we’re feeling and focuses it on something good.

So, just like my previous articles, I’m going to urge you to visit Open Door Music. I have always loved music and appreciated people who take the time to learn an instrument. This group is defined by its love for music. Because, music is so much more than something we create or listen to, it’s a way for us to express all the pain we’ve been feeling and turn it into something. A physical thing. But as Bob Marley said, when the music hits us we feel no pain, yes. But, what he left out is, that when the music hits us, really hits us, we feel free.

If you fancy unleashing your inner Rockstar, Open Door Music takes place every Friday 1pm-5pm at the Stagg Works in Sheffield. I might dust off my guitars after all. 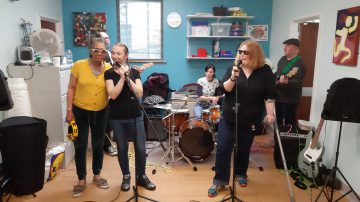 Alice Grenville: Rocking all over the wards! 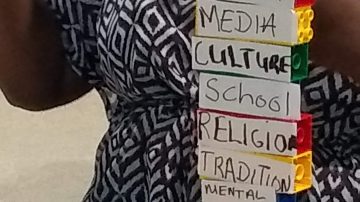 A memoir of our event with Festival of Debate - 'How can we rethink mental health?'